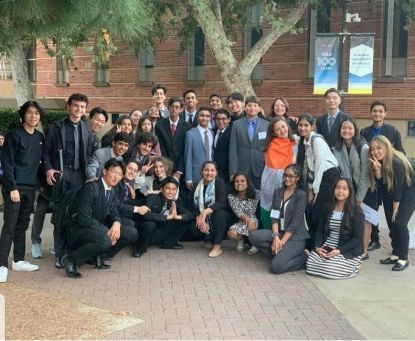 The Model United Nations (MUN) team won their first Outstanding Large Delegation award at BruinMUN 2019 on November 16 and 17. The conference was created and run by the MUN program at the University of California, Los Angeles (UCLA).
Granada Hills Charter’s MUN team was able to obtain this major award by winning individual achievements such as Honorable Mentions, building up the team’s final score for the closing ceremony. The team impressively managed to outrank major national and international schools, marking a very successful start to the MUN season.
“As for myself, I walked away with an Honorable Mention (3rd place) in my committee. Considering the competition I faced was probably the most difficult in Model UN thus far, I’d definitely say I left satisfied,” junior Rocco Fantini said.
This BruinMUN event enabled students from around the world to compete against one another in a UN committee. In this event, delegates are required to represent a specific country and network with others in order to come up with a solution to a global issue. After the delegates are finished discussing, they then provide an in-depth speech and debate addressing the solution that they came up with. Finally, they are scored based on how strongly they present their solutions and arguments in the conference.

The conference covers a wide range of topics with committees dedicated to various social issues. Teams must be both knowledgeable and strong presenters on these topics.
Unlike the traditional MUN conferences, BruinMUN included the United Nations Historical Crisis Council. The delegates were able to see their solutions play out in real time while having others reenact global issues in a particular scenario. This included them simulating the spread of different kinds of diseases or disasters in a certain country. By the end of the day, the world that the delegates had created could be different due to these actions and solutions that they applied.
“Crisis is a lot more fast-paced than normal MUN and it was really awesome to see all my solutions with my partner play out in real time. It’s crazy to see how different the world would be today if countries had thought a little differently,” sophmore Mahima Shyno said.