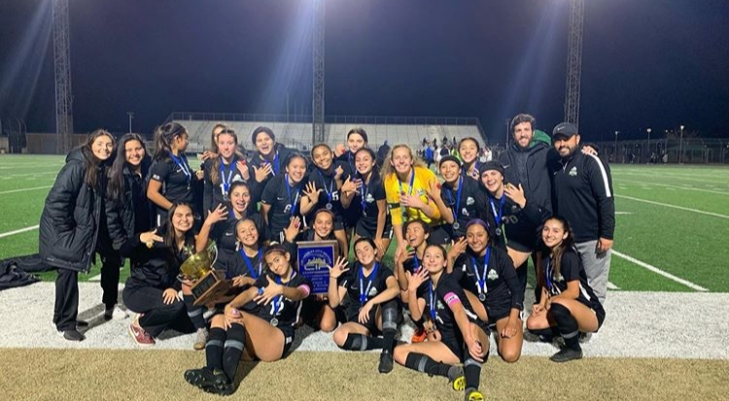 By Daniel Guerrero and Lily Birdt

On February 29 the Granada Hills Charter High School (GHC) girls varsity soccer team competed against Palisades Charter High School and won the California Interscholastic Federation (CIF) city championship game for the second year in a row at Monarch Stadium at Los Angeles Valley College. The team won penalties with the score of 5-4 after being tied 1-1 with the opposing team.

The team was undefeated for the second time in league play.

“Obviously, the highlight of the game was winning, but the most important part was knowing that my team and I had worked incredibly hard to end up winning the game,” senior Marlee Ragsag said.

Despite having a rough start, junior Tatiana Coleman scored the goal for the team during the second half, which made the team tied in the first place. Therefore, gave the girls hope for the end of the game.

The team went into overtime from there, but neither of the teams scored. Therefore, this forced them to do a penalty shootout. Each player from the team was able to score a point, as they both ended up tying 4-4 again until junior Crystal Earl came onto the field.

She was the fifth and final person to enter the field for the team. If she did not score, then the game would be forced to go into “sudden death.” The crowd went wild in the bleachers as Earl scored the winning goal. The players rushed the field, as the lights flickered on and off to signal their championship title.

Head coach David Huish started a game ring tradition four years ago in order to give the girls strength and encouragement. In order for this to happen, the girls would need to wear the ring the whole time leading up to the game. The upperclassman players give one of their rings to the lowerclassmen.

The game was not all smiles, however, as it also celebrated former coach Ricardo Sandoval. The team wore bands around their arms bearing his initials in order to represent him out on the field and attempt to make every game count for him.

“Ricardo Sandoval’s passing was very hard for coach Huish because that was his best friend. Putting those bands really motivated me everyday on the field,” senior Melina Saurman said.

However, the positive environment that the team produces for each other helps them to cope with challenges like these and play hard in the games. Without this type of bond, the team would have a hard time with their communication on the field.

Even though the team did advance to the next game for state championships, winning the city title and becoming undefeated in league is all that matters to them, while conquering many challenges.

Click here for the Plaid Press Suggestion Form. What do you want to see in the school paper? Who would you like to see featured (people, clubs, programs, classes, etc.)