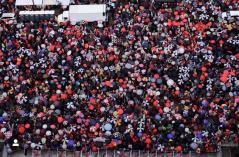 On Monday, January 14, over 30,000 Los Angeles educators left their classrooms to go on strike, disrupting the country’s second-largest school district. Weeks of heated negotiations between the United Teachers of Los Angeles (UTLA) and the Los Angeles Unified School District (LAUSD) went nowhere, leading to the city’s first teachers’ strike in 30 years. Despite the rain, thousands of teachers represented by UTLA went on strike after 21 months of failed negotiations.

After six long days and more than $125 million in lost revenue, the Los Angeles teachers’ strike came to an end on Tuesday, January 22. Negotiators for both UTLA and LAUSD reached a tentative agreement on a new contract early Tuesday morning, following a 21-hour negotiation that lasted until nearly sunrise. The new agreement with the district includes a 6 percent pay raise, a gradual decrease in class sizes over the next few years and more counselors, full-time librarians at each middle and high school, and a nurse at every school by fall 2020.

The strike impacted over 600,000 LAUSD students. UTLA had originally planned to start the strike on Thursday, January 10, but announced that it was being pushed back to Monday, January 14 over a dispute regarding whether UTLA had provided LAUSD with the legally-required 10-day strike notice.

Teachers in Los Angeles, similar to those across the United States, would enjoy bigger paychecks, but their demands went beyond salary increases. UTLA sought more money for counselors, nurses, and librarians, plus a reduction in standardized testing and promises of smaller class sizes. Both UTLA and LAUSD agreed that changes should be made. However, the big debate revolved around how to fund these changes. UTLA suggested using the $1.9 billion in unrestricted reserves, but Superintendent Austin Beutner declared the district would go bankrupt spending that much money.

“Let us be clear, teachers do not want to strike. Teachers strike when they have no other recourse, when there is no other alternative. We are more convinced than ever that the District won’t move without a strike,” UTLA President, Alex Caputo-Pearl said in a press release during the strike.

All LAUSD schools remained open during the strike, however thousands of parents opted not to send their children to school in support of their teachers. In fact, both students and parents were seen alongside their teachers along the picket lines.

Southern California schools are designed to accommodate large groups in the school yard, but that wasn’t an option with the rain. So to accommodate the limited staff on campuses, students were taken into auditoriums and cafeterias in some schools.

Another issue UTLA raised in the strike was unmitigated charter school growth. While most are not a part of the union, UTLA does represent about 1,000 charter school teachers. Caputo-Pearl stated the union is not against charters, however it would like to see more regulation.

“We are against the unregulated growth of charters and we are against charters being able to have lower standards that hurt students. There are charter schools that are shutting down because of lack of enrollment. We don’t need to have the grow-as-fast-as-you-can business model that’s promoted by charter school billionaires. We need to invest in our existing schools,” Caputo-Pearl said in a statement.

After the strike, LAUSD voted to put a moratorium on the creation of new charter schools until after an eight to ten month study has been concluded.

The city’s first teacher strike in 30 years proved to be a pivotal moment in history, not only for the nation’s second-largest school district but for the students in it.