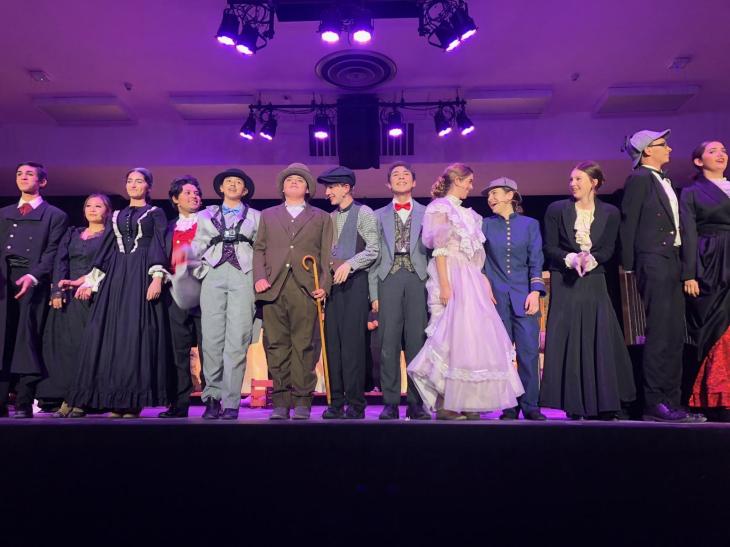 As the energy in Highlander Hall rises, and the rows upon rows of chairs that line the floor are filled, friends and family members find their seats before the showcase.

A curtain divides the audience and the world backstage, where cast members frantically run their lines and check their props one last time while wishing each other good luck as the lights dim.

The curtain is drawn back and the peering audience is shown an artist’s studio in Paris, 1846. Granada Hills Charter High School’s (GHC) fall production of “Is He Dead?” is about to begin.

“Is He Dead?” was written by Mark Twain, most notable for his “The Adventures of Huckleberry Finn.” Twain wrote this farce, a light and humorous satirical play, in 1898, though it was not published until it resurfaced in 2003 after Shelley Fisher Fishkin, a Mark Twain scholar, read the manuscript.

The play follows Jean-François Millet (Gavin Riley), a struggling French painter who fakes his death with the help of his friends Chicago (James Averill), Dutchy (Kerry Sempelsz), and O’Shaughnessy (Melissa Hernandez). He poses as his long-lost twin sister, the widow Daisy Tillou, and chaos follows the charade.

“‘Is He Dead?’ was a wonderful experience for me! I’ve played some interesting characters in the past, but I think cross-dressing for fame and fortune takes the cake. Our cast was absolutely fantastic and such a joy to work with,” Riley said.

“Is He Dead?” is unlike any plays that Granada has put on in the past, such as “Peter and the Starcatcher”, “A Midsummer Night’s Dream”, and, most recently, “Romeo and Juliet”. Many students were drawn in to audition by the farcical nature of the show.

Throughout the play, moments of comedy were strewn around as elements of cross-dressing, mistaken identities, and deception comment on the effects of greed and fame.

The actors had to be creative with Twain’s writing: their own interpretations of their character proved just as important as the words on their scripts. Director Stuart Fingeret, GHC’s own wonderful drama teacher, guided the cast through the whole process. To act as a completely different person than yourself—and in a farce, no less—is no small feat.

“‘Is He Dead?’ has allowed us as actors to dive into a new persona and portray these complex characters. I really enjoy Twain’s writing as it is different than our previous production, Seussical. It is both comedic and serious at times, which I enjoy,” Riley said.

Many of those involved in the production and performance of the play were excited to see the audience filled with beaming faces and applauding hands on November 16 and 17 in Highlander Hall.

“It was very enjoyable to be a part of this cast because we all became such good friends. We were really just one big family,” sophomore Charlotte Hawtrey, who played journalist Claudette Riviere, said.